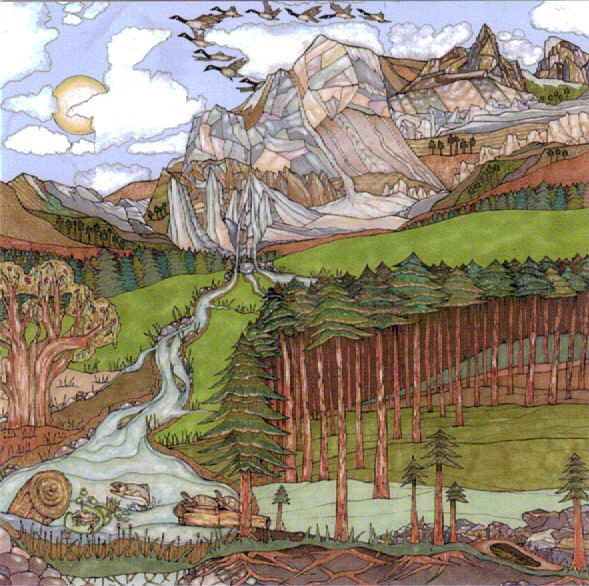 In the late 1800s, hardy mail carriers lashed snowshoes onto their feet to haul mail from the old mining town of Nye City up the Stillwater River drainage to the miners of Cooke City about 40 miles away. Or did they?

The tale has been only vaguely referenced over time. The accounts are few and lack detail. But could they be true? Here is what is known:
In July 1870, gold was discovered in the mountains near Cooke City. At the time, the area was still part of the expansive Crow Indian Reservation that stretched across much of what is now Park, Sweet Grass, Stillwater, Carbon and Big Horn counties. But as they had done in the Black Hills of the Dakotas in 1876, Euro-Americans by 1882 found a way to circumvent the supposedly binding contract of the treaty and opened the mountains to miners.

According to an article written by George J. Racely, mail was hauled along the trail.
“During the mining boom, a mail route followed the main Stillwater River from Columbus to Cooke City,” Racely wrote in “The Beartooth Primitive Area,” published in the 1966 edition of The Montana Outfitter magazine. “The mail was taken by horseback to the Upper Stillwater Basin and the rest of the distance by stage.”

This seems to echo a 1938 history written by Kenneth E. Chriswell, a recreational guard for the Custer National Forest. In a paper titled “A Handbook for Campers, Picknickers, Fishermen and Tourists,” Chriswell writes: “It will no doubt be of interest to visitors to the Stillwater area that in the early days a mail route followed up the main canyon to Cooke City. According to some of the old-timers the mail was taken by horseback as far as the upper Stillwater basin and from there by stage the rest of the distance.”

Ralph Glidden’s 1982 book, “Exploring the Yellowstone High Country: A History of the Cooke City Area,” lends further credence to the tale. Glidden writes that in 1909 Nels Soderholm got the job as postmaster in Cooke City.

“The job was not easy, as mail was brought from Nye City in the winter by a man who skied from the Stillwater River area to a cabin near Lake Abundance,” Glidden wrote. “Soderholm then skied over Daisy Pass to pick up these mail bags.”

To travel up the Stillwater on snowshoes or skis in winter would have been a tremendous undertaking in the late 1800s and early 1900s. Clothing was wool or cotton and boots were uninsulated leather. The snow would be deep and cold, blizzards and avalanches always a threat. Today’s forest travelers can simply refer to a weather or avalanche forecast to plan the best dates for travel. Were there once shacks along the route to provide out-of-the-weather, overnight accommodations? Making the trip in one day from Nye City 26 miles up grade to the Upper Stillwater Basin would have been difficult.

An account found online includes the mail carriers’ names. In “The History of a Ghost Town” by Jay W. Hanks, he writes: “From Nye City the mail was carried up the Stillwater to Cooke City by Albert Boman and Oliver Kelseth. Pack horses were used to carry the mail to Cooke City in the summer months and in the winter time the mail was carried in by men on snowshoes.” Hanks reportedly wrote his history of Nye sometime between 1943 and 1953.

Jim Annin’s three-volume set, “They Gazed On The Beartooths,” refers to an Albert F. Bowman (also Bauman), known as “Dutch Albert” to Stillwater County residents. According to a Stillwater News article from 1937 that Annin referenced, beginning in 1887 Bowman drove stage in Yellowstone Park for five years and for three years “carried the mails on snowshoes from Gardiner to Cooke City.” Could this be the same Boman that Hanks mentions?

“Cooke City accounts are too few,” said Lee Whittlesey, Yellowstone National Park’s historian. He said he’d never found any evidence of a mail route between Cooke City and Nye City through the Stillwater drainage. This much is certain. By 1883, the Northern Pacific Railroad had reached the town of Cinnabar, just north of Gardiner. By then, George Wakefield had established a mail route from Cinnabar to Cooke City through the Lamar Valley. Along the route he built a saloon near Soda Butte Creek in Yellowstone National Park and another mail station along what he called the East Fork of the Yellowstone River.

So some questions arise: Why bother carrying mail up the remote Stillwater River drainage from Nye City to Cooke City if it could be carried by train as far as Cinnabar? Or was the route up the Stillwater used only before the railroad to Cinnabar was completed? “I’m very skeptical that there was one that early,” Whittlesey said.